The Pilot Custom 823 holds a couple of special places in my small collection of fountain pens thus far - it is my first vacuum filler, as well as my most flexible nib.

As a lefty, I have a particular attraction to copperplate calligraphy, and the #5 soft-fine nib I have in my Custom Heritage 92 was not going to cut it for the long term. When researching modern flex, I found the best options to be a large #15 Pilot FA nib (found in the Custom 743), or an Omas. Omas nibs seem to have a reputation for being easily sprung, so I decided to stick with Pilot.

I was resigned to have to settle for a cartridge-converter pen with the FA nib, but luckily, /r/fountainpens user l_iollan pointed me to http://www.japanshop-quill.com/ where they sell Custom 823 vacuum filler pens with FA nibs. Normally not offered by Pilot, this combination offers a unique marriage of a large ink capacity, an easy to operate/maintain filling mechanism, and a flexy nib.

Doing business with Yasukazu was a pleasure - quick e-mails, fast shipping, and included extras in the box added up to a great experience. And so, in less than a week, I found myself with a new pen. 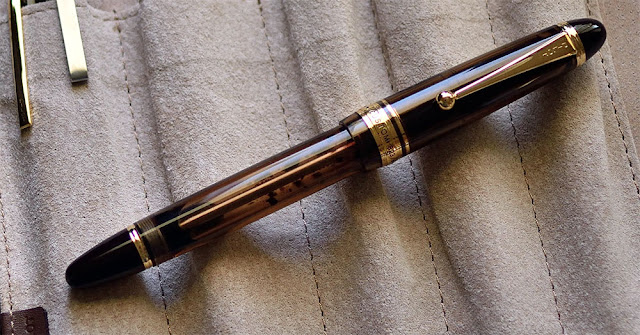 Even though all three color options were available (amber, smoke, and clear), I chose to go with amber. The trim and nib are gold regardless of the color of the plastic, and I thought it matched best with the amber resin. The cap band engraving has "Custom 823" and "Pilot made in Japan" separated by stars. 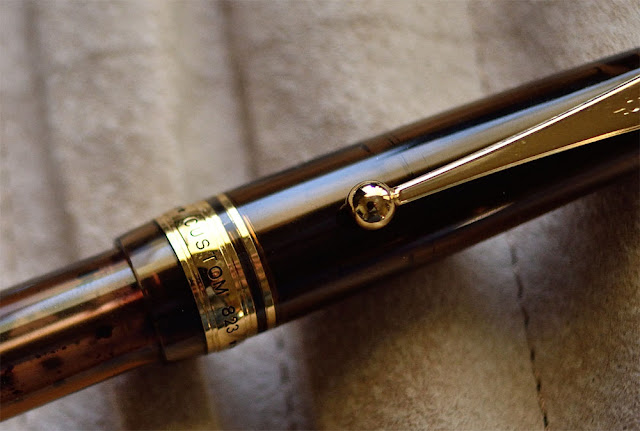 The nib, as an FA "falcon" nib, lacks decoration, but has a distinct shape the resembles the sweeping look of a bird-of-prey's head. The cutouts on either side allow it to flex more than a standard nib shape. 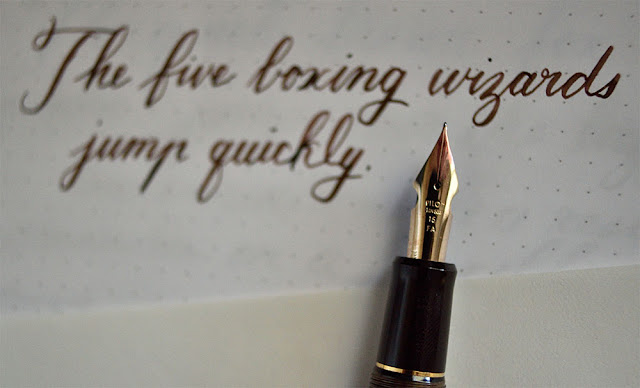 This is a long pen - the longest one I own. But the diameter is quite thin compared to some monsters like the Montblanc 149. The length makes it comfortable to write with unposted, but because it posts deeply, below the vacuum piston cap, it can be used posted as well.

Filling the 823 is easy, and the piston moves so smoothly you can hardly tell it is creating a seal at all. I filled it with some Iroshizuku Tsukushi to match the color of the barrel, but the color of the ink barely shows through the dark, translucent resin. The weight of the pen increases substantially when filled, due to the 2.0+ ml of ink it can hold.

Writing with the FA nib is excellent in almost every way. I'm not sure if Yas does extra tuning or testing when he fits these nibs into the 823, but the flow and smoothness were exceptional out of the box. Unflexed, the nib resembles other Japanese fine nibs, if not for being a tad wetter. Strokes in all directions are smooth, with minimal feedback. I was worried about such a fine nib feeling scratchy on side-to-side strokes, but it was perfectly smooth.

Flexing is what this nib was made for though, and it performs admirably. Compared to my soft-fine, it takes less pressure to get the widest line, and it snaps back to a fine point faster. As long as I remember to unseal the cap before writing a lot, I've never had a problem with ink starvation or lack of flow. I expect this to be somewhat ink and paper dependent however, and Iroshizuku inks tend to have very good flow. At the moment though, I can fill entire pages with flex writing without having any railroading.

Some railroading does occur, but it is mostly localized on certain parts of a page. This is probably due to residue and oil from my hands - I had this problem with another pen as well, and it was remedied to a great degree by washing the nib and feed in very dilute dish-soap water. I may clean this pen out in a similar way in the future. 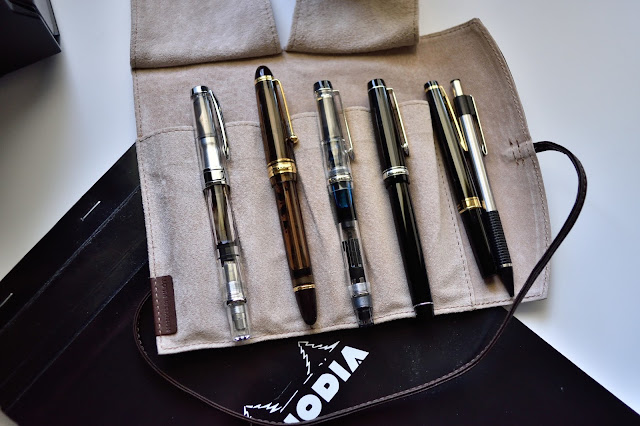 Overall, I couldn't be happier with my purchase of the Pilot Custom 823 with FA nib. Thanks to Yas for being the only vendor to sell this pen and nib combination, and thanks to l_iollan for suggesting his shop! The 823 has not only joined my daily carry of pens for work, but also become my go to for learning and practicing calligraphy.
Posted by Justin Tseng at 5:33 PM 4 comments: